Earlier this month Metallica released their new album, Death Magnatic, to great reviews and so far it has sold more than 500.000 in the United States alone. So what is wrong with this rose red story? Sadly the new album has become the one of the latest victims of the loudness war. At first, people just thought it was the quality of bad 128kbit rips that made it sound so bad, but as the cd started arriving in the hands of people, the sharp reality that this was indeed the final mix hit people smack in the face. And is not pretty a pretty sight (death magnetic at the bottom if you were in doubt :)): 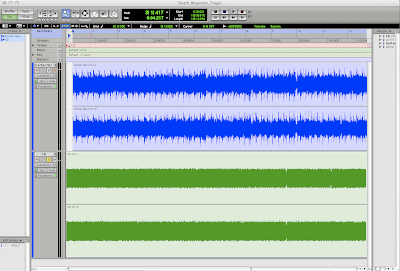 So far Metallica has been completely silent about the whole deal. Luckily people soon figured out that the mix was much better on the Guitar Hero 3 version and in short order someone figured out how to rip the sound of the game. All was not perfect though, some people claimed the Guitar Hero 3 was too flat and missing some of the “oomph” of the original mix. But it didn’t take long before someone fixed that, and a guitar hero version 2.0 was born.

So is this what the world has come to? That you have to be a filthy pirate in order to enjoy the latest album of a band you have been listening to for the last 15 years? A petition has started online to get Metallica to release a fixed version of the album. But until that day comes, I’ll be happy to call myself a pirate.